The recent climate negotiations: A perspective from the Global South [WebDebate #52] 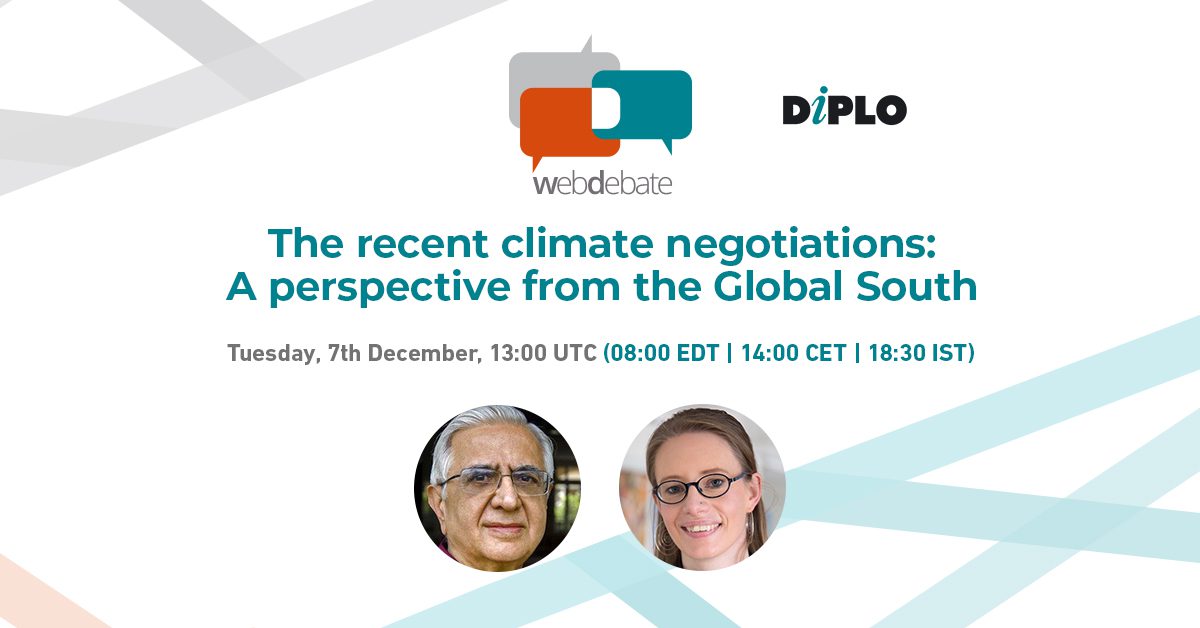 The recent climate negotiations: A perspective from the Global South [WebDebate #52]

Climate change is one of the most pressing issues that humanity is facing today. Given current carbon-emission levels and the projected global warming and its consequences over the next decades, it is clear that business as usual is no longer an option. Human lives, livelihoods, species, and ecosystems are under threat. Global solutions for reducing carbon emissions and adaptation to climate change are needed.

Every year, the world focuses on the negotiations taking place under the umbrella of the UN Framework Convention on Climate Change (UNFCCC). In 2015, the negotiations resulted in the Paris Agreement. While the Paris Agreement is a major achievement in terms of a clear global commitment to emission reduction, it hinges on voluntary national emission reduction goals. Its climate financing goals are yet to become a reality. With this in mind, the expectations for the climate negotiations at the 26th Conference of the Parties (COP 26) in Glasgow this year, were high. The commitments made at COP 26 have received some praise and quite a lot of critique.

In this 52nd WebDebate, we take a closer look at the climate negotiations at COP 26 from a Global South perspective. Together with our eminent speaker, Ambassador Kishan Rana from India, we explore some of the following questions:

Amb. Kishan S Rana is professor emeritus and a senior fellow at Diplo. He was awarded a BA (Hon) and an MA in Economics from the St Stephens College Delhi. He was in the Indian Foreign Service (1960–95), and has also worked in China (1963–65, 1970–72). Rana was ambassador and high commissioner for Algeria, Czechoslovakia, Kenya, Mauritius, and Germany; and consul general in San Francisco. He served on staff of former Indian prime minister Indira Gandhi (1981–82).

Rana is the author of Inside Diplomacy (2000), Managing Corporate Culture (co-author, 2000), Bilateral Diplomacy (2002), The 21st Century Ambassador (2004), Asian Diplomacy (2007), Diplomacy of the 21st Century (2011), India’s North-East States, the BCIM Forum and Regional Integration (co-author, 2012), The Contemporary Embassy (2013), and Diplomacy at the Cutting Edge (2015). He is co-editor of Foreign Ministries (2007) and Economic Diplomacy (2011). The two books were translated into Chinese. Some of his publications are used as textbooks at several universities. He has also written more than 100 articles for academic journals and newspapers.

Dr Katharina E Höne researches, writes, and teaches on a number of issues in the area of diplomacy, global governance, and the impact of technology on international relations. Over the last years, she has focused on research at the intersection of diplomacy and technology. She holds an MA in Diplomatic Studies (University of Leicester, UK) and a PhD in International Politics (University of Aberystwyth, UK). In her work, she is driven by her aim to level the playing field at international negotiation tables through capacity development.

Our WebDebates on the future of diplomacy are live-streamed on the first Tuesday of every month. They are organised by Diplo within the framework of the International Forum on Diplomatic Training (IFDT). Learn more about our WebDebates series.

This website uses cookies to improve your experience while you navigate through the website. Out of these cookies, the cookies that are categorized as necessary are stored on your browser as they are essential for the working of basic functionalities of the website. We also use third-party cookies that help us analyze and understand how you use this website. These cookies will be stored in your browser only with your consent. You also have the option to opt-out of these cookies. But opting out of some of these cookies may have an effect on your browsing experience.
Necessary Always Enabled
Necessary cookies are absolutely essential for the website to function properly. This category only includes cookies that ensures basic functionalities and security features of the website. These cookies do not store any personal information.
Non-necessary
Any cookies that may not be particularly necessary for the website to function and is used specifically to collect user personal data via analytics, ads, other embedded contents are termed as non-necessary cookies. It is mandatory to procure user consent prior to running these cookies on your website.
SAVE & ACCEPT